Anecdotal evidence is alive and well 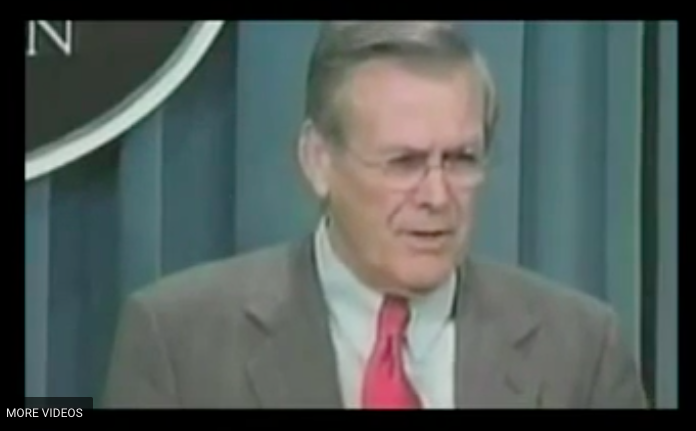 Anecdotal evidence is alive and well!

As a disclaimer, I am all for refereed medical research striving to reach the correct answers so that we can all live healthier and more fulfilling lives. As to qualifications, I am constantly in an academic environment where I am closely associated with the university in town teaching residents who rotate with me every day, year-round. Anecdotal evidence of any kind is routinely denounced by the “purists”. This is why you are wrong. This is my vote for allowing a bit of anecdotal evidence to be tolerated.

(of an account) not necessarily true or reliable, because based on personal accounts rather than facts or research.

The operative phrase in this definition is “not necessarily”. The word anecdotal in the medical world is synonymous with unequivocally incorrect, not worthy, absolutely wrong, etc. Anecdotal information, ideas or the such are taboo in any “intelligent” medical discussion. Any thought, or any idea that is not based on evidence and is therefore anecdotal, and thus cannot be right and is not to be considered, much less believed.

When it comes to what is what in the medical field, vetted, scrutinized, refereed, bona fide Level I evidence is the gold standard. Anything short of this is just not good enough! However, this dogmatic, stuffy sentiment leaves much, if not all of the medical profession in a heap of confusion. Let me explain.

Medical research is a lot like schizophrenia; there is a general lack of ambivalence. When it comes to what we know and how we learn and advance in the medical field, we doctors, we researchers have the hardest time with the anecdotal grey zone or ambiguity. At least we have a hard time admitting that anecdotal information even exist, let alone might be useful, in earshot of others. That would be like guys admitting we pee in the shower. Who would do such a thing; not me. Black and white, right and wrong is how a perfect medical world would function for sure. There would be no questions; we would just know and we would always be right.

Undecided to publish this piece, my mind was made up just reading the recent work of Danielle Ofri, M.D. She make an excellent point in the Well section of the New York Times, “Uncertainty Is Hard for Doctors”.

What this near zero-tolerance craziness creates is a system where a lot of good information, based on extensive observation, is often overlooked because it just does not rate. Just because a medical idea or a clinical observation is not supported by clinical research yet, and is by default anecdotal, does not automatically deem it to be wrong. There is a lot of very good information or evidence that is anecdotal that does not meet the stringent Level I. On the other hand, loads of Level I studies are produced every year that are crap. Really! God help us if we ever consider information that is anecdotal, Level 378 research. In my opinion, when someone throws out the “that’s anecdotal” card, they are a hypocrite. 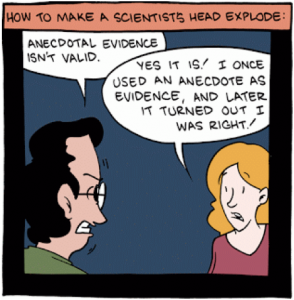 Here is the truth that we doctors will not discuss openly, and it ain’t so bad. We practice anecdotal medicine EVERY DAY. The purist and even pretend academicians will deny this statement vehemently. They also don’t pee in the shower. We can’t help it because not everything is known, and so much never will be known. Some of the time we have to practice, pontificate, and operate anecdotally. If anyone says otherwise they are either lying or they they have very poor insight.

Every single day we practice medicine, no matter who we are, we are applying anecdotal methods and knowledge. We just don’t want to admit it or we are unaware we are doing it. Anecdotal ideas or concepts can follow two paths: anecdotal info that is clearly true, but untested and worse, anecdotal pontifery that is untrue, yet we believe it to be true because it has been around long enough to be grandfathered in.

Tenth Law of the Dinosaur:

Here are just two examples of many:

There are a lot of great anecdotal ideas out there that never get out. Let me substitute the word observational for anecdotal. Every observation a physician makes, adds to his/her understanding of a problem. The cumulation of these observations over time shapes how a physician approaches a certain problem, diagnosis, or topic. This development of understanding is absolutely unavoidable, and without a doubt is shaped by time and experience. It is called the practice of medicine. It is this process that leads to the formation of a hypothesis, or an idea that could then be tested. The process of testing these hypotheses is rigorous, time consuming, and costly; so it often does not get done.

Here is the irony of it all. There are two words that researchers generally try to avoid: proof and anecdotal. In a way, we really can’t really prove anything, except for maybe in mathematics. Everything else we are left with turns out to be varying degrees of anecdotalism. I just made that word up along with pontifery above.

When you get right down to it, every bit of good evidence, even well done, well-accepted Level I evidence, was at one time anecdotal, but even then it was no less true.