Albert Pujols, Looking in All the Wrong Places 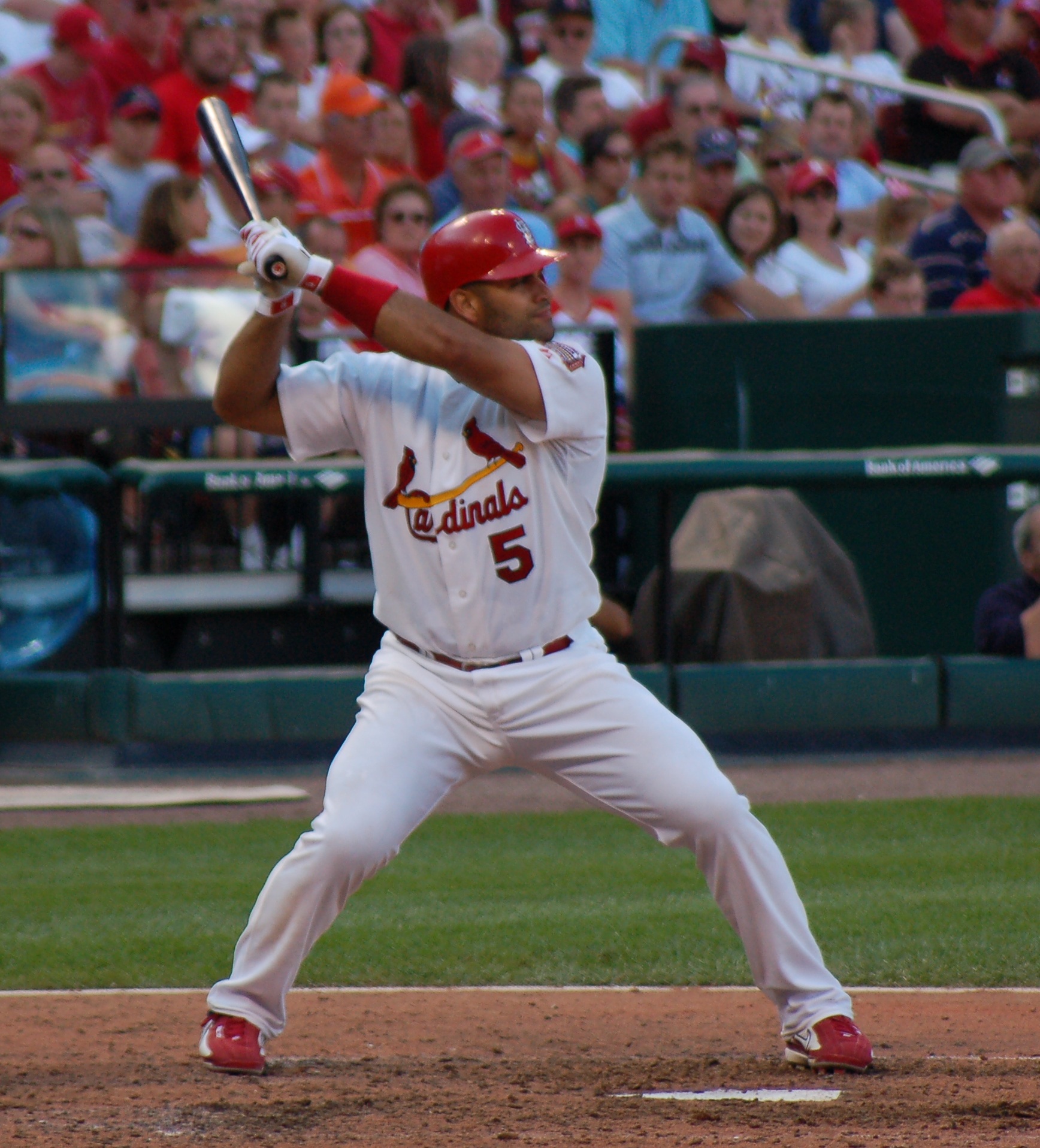 Al, Al, Al…it is time to stop listening to your trainers, your team doc, and aunt Bessie and do the right thing.

Here is a call to action to everyone in AngryLand. Somebody please get the word to Big Al and many more big leaguers who have plantar fasciitis, that calf stretching everyday is the answer. Pujols was on the IR for plantar fasciitis last season and I am certain stretching was not part of his solution. Okay, maybe he did just a little bit.

Now he is out with what sounds very much like second MTP synovitis. These are kissing cousins and both are a result from the exact same common denominator, the isolated gastrocnemius contracture. The first problem, plantar fasciitis was not really fixed, just palliated and he got better because they treated the usual and the obvious thing, his heel. This is the rule not the exception. Now with the underlying problem, the isolated gastrocnemius contracture, still present and UNTREATED, he has developed a predictable second MTP synovitis. Small world. Who would have guessed. Well, actually most would not, especially those treating him.

What is really cool is most of you Angry followers know… More on Albert later.

This brings me to one of the many reasons these sort of problems are misdiagnosed so often especially for us common folk.

This article uses an incorrect terminology found all too common: injury.

When it comes to the majority of foot and ankle issues we see please don’t just nilly willy call them “injuries” unless of course they really are an injury. They are acquired inflammatory disorders of mechanical imbalance, not injuries, end of discussion. An actual injury is when you have a split second, acute force (blunt force, twisting, bending, etc.) applied to a body part and you go down in a heap yelling mother fu@#er. Then you limp off, swell, hurt some more and go to the doctor or your trainer.

I see so many patients weekly who have seen one or more docs with a history of an injury of some sort. I will have them describe the “injury” and what I usually get, about 75% of the time, is a very different story. I was playing in a soccer game, or at football practice, or walking in the mall and I injured my foot (or ankle). Then I ask “So, when exactly did the injury occur? How much swelling did you have? Did they have to carry you off the field?” Of course the answer is no. They say “I just started to have some pain. I actually played the rest of the game.” Or something like that.

These are not injuries! But that is how almost every patient describes the origin of their presenting problem. Why? Well it is pretty obvious, musculoskeletal complaints can only result from injuries, right? Wrong.

…musculoskeletal complaints can only result from injuries, right? Wrong.

These “injuries” are actually acquired inflammatory disorders of mechanical imbalance as I said above. Something remote and likely not detectable is out of whack, imbalanced, and something else takes the brunt. This is way more common than one would think, and probably most true in the foot and ankle. And the likely culprit is the isolated gastrocnemius contracture, at least in the foot and ankle.

The reason their problem is misdiagnosed is because the doctor believes them when they say it was an injury and he/she likely too busy to ask the critical questions. Thus, starts a wild goose chase looking for the wrong thing because they are on the wrong side of the algorithm. Trust me when I say that acute, true injuries are on one side of the algorithm and inflammatory problems of imbalance are on the other side. They are worlds apart. 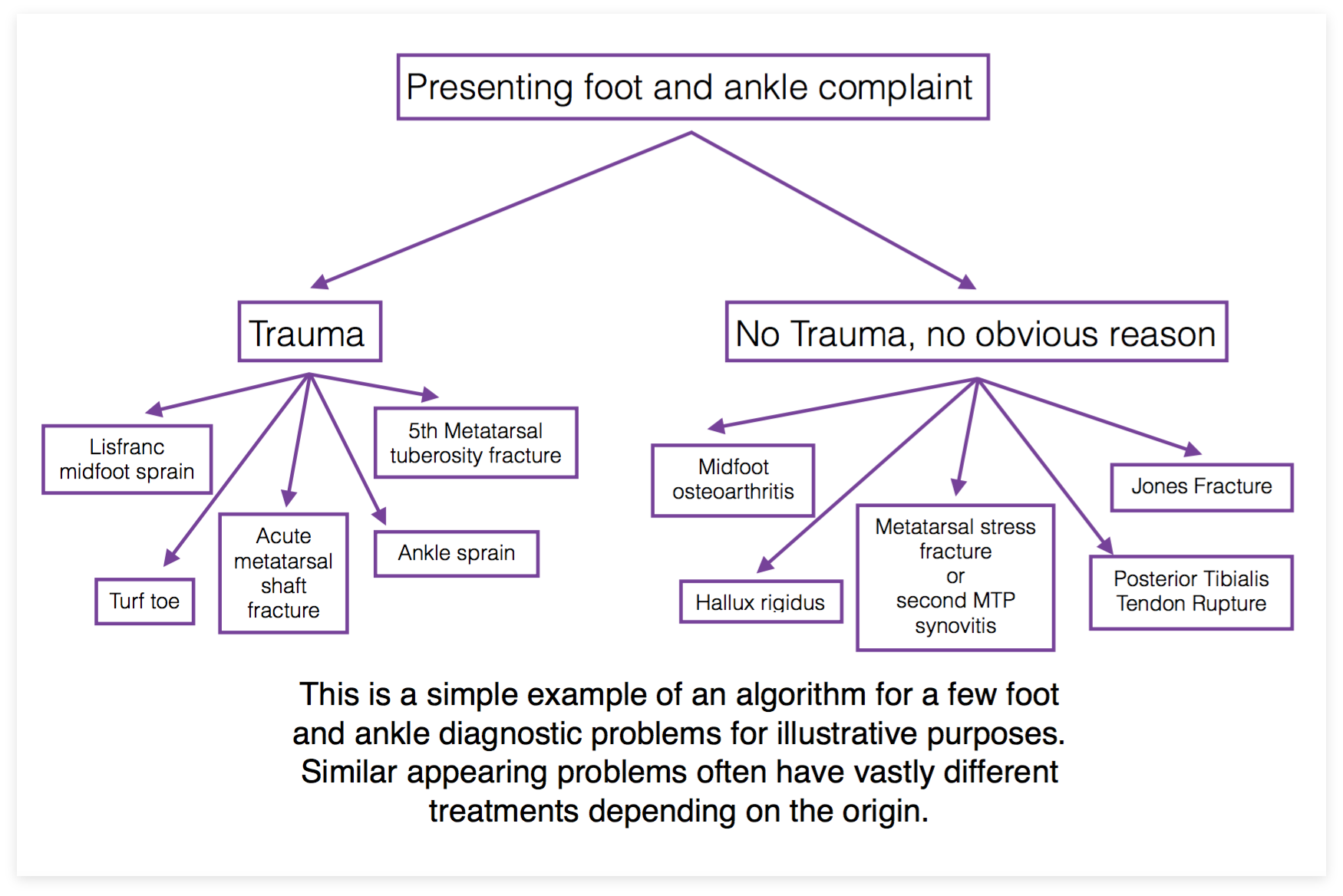 So Mr. Pujols, please get over to the other to the correct side of the algorithm and stop treating an “injury” if you want to get better. Start stretching your calves and fix your problem.

About twenty years ago I was asked to see an acquaintance’s 16 year-old niece for a knee “injury” incurred running track (back when I saw knees occasionally). She had seen another orthopaedic surgeon who obviously heard the word “injury” and took it at face value.

,He examined her and determined that she had a medial collateral ligament partial tear and no X-ray was obtained and she was sent to physical therapy. However, there was never an injury, it just started one day at track practice along with swelling. This is the history I obtained determining this was indeed not an injury. Thus I was now on the correct side of the algorithm, and I suspected some sort of tumor knowing this is the age and the typical story… An X-ray was obtained and a lytic lesion (bone tumor, Ewing’s sarcoma determined at biopsy) was obvious. Ultimately she was referred to M.D Anderson and was successfully treated by the experts.